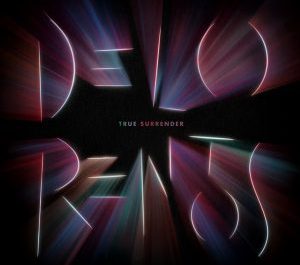 Our new album TRUE SURRENDER will be released on April 27th, 2018!

It’s been in the works for a while, and we are super excited to let you hear it and play the songs live! I know everyone says it – but it’s our best album. 🙂

“While on tour in the autumn of 2015 the band were lent a small studio in a Vineyard in Northern Spain and set about recording the bones of a new album. They recorded 15 songs but, on returning home, weren’t happy that the songs reflected the band’s current creative space - they were too close to what the band had done before and not a true reflection of the band's collective feeling. They began to question their way of writing, their dynamic, and what they wanted to achieve with their songs. They realised they were looking for more soul, more honesty, and a level of openness and intimacy that they'd never felt comfortable revealing before. The Vineyard album was scrapped and they surrendered completely to what gradually became an entirely new way of working. “True Surrender was written, arranged, recorded, mixed and honed over a chaotic three year period of bilocation, the birth of children and a heightened level of personal and professional anxiety – not to mention all of the usual trials and tribulations of the creative process and the artistic battles that are par for the course. Songs were written, stripped back to their core and rebuilt with new instrumentation, new meaning and a constant, fervent desire to pour their hearts and souls into every bar of music.”

There’ll much more news of Instores, preorders, tracklistings, All ages gigs, etc coming – but for now, we wanted to announce. You can hear songs from True Surrender on our intimate April Tour – Tickets are Here – and hear tracks from the album on Spotify here – Spotify Delorentos