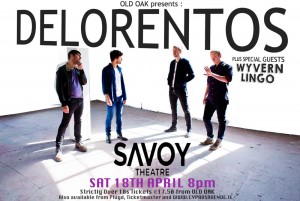 The last time we spoke was in February… you never call, you don’t send postcards…. But we still love you.

Since then :
Choice Music Prize

We were *successfully nominated for ‘Album of the Year’ and ‘Song of the Year’ at the Choice Music Prize, playing with James Vincent McMorrow, The Minutes and lots of great nominated acts (no sign of U2 unfortunately). Congrats to the Gloaming! We played with them in Paris last year, deadly stuff.

CORK AND GALWAY SHOWS!!!
But most importantly we are about to play our two biggest ever shows in Cork and Galway. It’s a big deal for us, as it gives us a chance to show a larger audience the expanded sound of ‘Night becomes Light’ and the set we have been working on for the past 6 months. We are really excited to put on something different, and hope you can make it. Support is from the Fantasticly talented Wyvern Lyngo fresh from backing up Hozier, we really like their stuff and are delighted they can join us for these two special shows.

We have to say we are absolutely bowled over by the response to Forget the Numbers, its been one of our most played songs ever on Irish and International Radio. It’ hard to get songs played, and something we really appreciate –so to every DJ, listener, streamer, and streaker Thank you! We’re debating the next single – what do you think?

You can see the video here: https://www.youtube.com/watch?v=oMSKneELG-I

Finally:
We are announcing more and more shows, as the response to Night Becomes Light so please keep an eye on our sites here: Twitter / Facebook / Instagram

If you’re like to pick up our new album, wherever you are: Bandcamp.com!

Also, it looks like we may be returning to a place we never play, and haven’t been since we started out, it could be a bit special… see you soon..