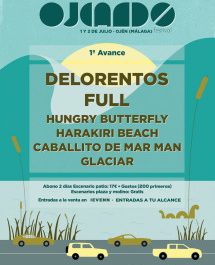 This weekend we’re playing two great shows in Spain: Ojeando Fest, Ojen, Malaga and POP CAAC, Seville! click on the right for tickets! >>> Both gigs sound amazing, with the reputation of the Ojeando show and the amazing location of the Seville gig. Can’t wait.

We’ve just back from amazing shows at Polifonik Sound, Barbastro and EmDiv, Alicante, two of the gigs of the summer for us, so we can’t wait until we’re back again this week! The gigs were both pretty late, as most Spanish gigs are, so we had to get seriously hyped up to play and they ended up being pretty explosive, we couldn’t sleep afterwards.

We’ve got loads more gigs coming over the summer, and our next Irish show is in Kilkenny, at the Kilkenny Outdoor Music Festival on the 23rd July – You can get tickets on the right! >>>>>

The big news that we announced on our Facebook live is that we’re releasing Night Becomes Light in Germany, UK, and Netherlands on the 26th August! We’ll be announcing gig dates and all the details closer the time, but it’s gonna be exciting! 🙂 Before this album we’ve only released in Ireland and unofficially outside of it, but this album has changed all that.

Let us know where we’ll see you soon – thanks for reading and keep an eye out for another facebook live show soon!