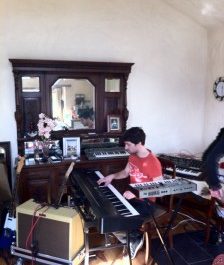 Well, since we last posted a blog or news we’ve been pretty busy, and we’re almost ready to tell you what’s going on! The good news is we’re finished the mammoth recording of our third album “Little Sparks”, and we’ll be releasing a very special EP very soon.

It’s almost 5 years to the day we first recorded something as a band and released our first EP, “Leave It On”, so we decided it would be cool to release a new EP of new music before the album. Like everything else on this album however, we’ve tried to make the release as interesting and special as possible, and so we’ve enlisted the help of some of our friends for the release… more on this to follow…!

As regards the album, we’re very proud of it and we’re not going to rush it to have it out by November (which at this stage would be the earliest release), we’re going to wait a few weeks, work on the artwork and the mixes, and release it very early in the new year. For us, we think this is the best album we have ever done, so we want to take the time to get everything right (We also want time to choose the best running order and tracklisting, and chosing an album from the 15 songs we recorded has not proven easy)

As regards gigs, we’ve started back in the practice space and we’re currently trying to work out how to play the songs, Some are quite different and will be a challenge… 🙂 We’ll let you know gig details as we have them.

Anyway, this is just a little update to let you know whats going on, we’ll be in touch real soon with more, we’re very excited for you to hear it!

Thanks for reading…
delos